History of the Sangaste Castle

When F. G. M. von Berg (1845–1938), the last Lord of Sangaste, took over the manor household after his father’s death in 1866, the family lived in the 18th century mansion approximately a hundred meters north-west of the castle. Young Berg decided to build a new mansion. He had been inspired by English castles (Berg had even visited the royal castles of Windsor and Balmoral). Berg’s ideas were put on paper by Tallinn architect Otto Pius Hippius (1826–1883). Berg dreamed up a true castle with spacious rooms and different windows for each room (check out the castle windows!). Construction took 7 years, from 1874 to 1881. The castle originally had 99 rooms, since a home over 100 rooms was only allowed for the Czar. Reconstructed and refurbished as a Soviet Pioneer Camp,  the castle had as many as 149 rooms (including storerooms).

The main entrance is marked by a gate tower (although without the portcullis, suspended bridge and trench) over an arched-column entrance hall. The hall boasts exceptional acoustics – whispers one corner are clearly audible in the other. The castle’s picturesque silhouette is formed by towers with different shapes. Step-gables, dormers and protruding and retracted facade elements contribute to an eclectic richly-structured style. A special feature of the new way of life was a glass-roof winter garden, which has unfortunately not

The first floor is for official rooms – a high Gothic ballroom in the shape of a Roman edifice, a beautiful Spanish Room with Moorish influence, and an English-style hunting room with an oak ceiling. The Count’s bedroom was on the first floor as well.

The second floor included bedrooms for the family of his son Ermes, a library and a billiards room.
On the third floor were the servants’ rooms and in the adjacent wing, or the main tower wing, the guest bedrooms. From here, one can also access the watchtower. 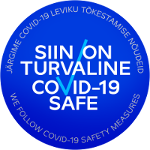 With the COVID-19 safety label, trusted to us by Visit South Estonia / Visit Tartu we confirm that we follow the requirements and instructions of the Government and the Health Board of Estonia established for our field of activity, we keep up to date with the information and help visitors to comply with the virus prevention rules on site.